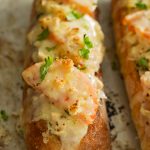 This cheesy Tuna Melt as a lunch or dinner entrée. This tuna melt is filled with creamy tuna salad topped with tomatoes and bubbling cheese that please a small or large crowd.